Sigma Nu was founded in 1869 by Cadets James F. Hopkins (A 0001), Greenfield Quarles (A 0002), and James M. Riley (A 0003) at the Virginia Military Institute in opposition to hazing practices then out of control. The history of Sigma Nu is well-chronicled on the general fraternity’s website; this page concerns itself with the uninterrupted presence of Sigma Nu at Case Western Reserve University over the last century.

The Case School of Applied Science, captured for the 1912 Delta Alpha alumni newsletter.

After several decades of westward expansion from its Virginian birthplace, Sigma Nu came eastward and established chapters at the Ohio State University in 1891 and Mount Union College in 1892, setting the stage for a third Ohio chapter in Cleveland. The history of this chapter, Sigma Nu’s Delta Alpha Chapter, begins with the founding of the Cleveland Sigma Nu Alumni Club in 1899. The alumni attempted to found a collegiate Sigma Nu chapter in Cleveland for several years. Their attempts focused on the Case School of Applied Science, which had been founded in 1880, but their initial efforts failed largely due to the Case School’s young age and untested reputation. 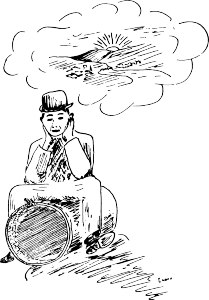 Their work eventually paid off when Beta Iota Chapter’s Harold H. Woods (BI 0151 / ΔA 0007) transferred from Mount Union College to Case after changing majors. With the Cleveland alumni club’s help, “Hop” Woods recruited Clark W. Francy (ΔA 0001) and five others to found Delta Alpha, the 71st chapter of Sigma Nu Fraternity, on 22 February 1907. The Delta Alpha Chapter of Sigma Nu was the first chapter at the Case School founded as part of a national fraternity without taking time to build its strength as a local, much to the consternation of Case’s other fraternity chapters.

It was only a matter of time before Sigma Nu entered the institution across the quad from Case: In the fall of the same year, students of Western Reserve University dissatisfied with the quality of Reserve’s fraternities formed the Alpha Nu Society. Their intent was to join a national fraternity; they sent an inquiry to The Delta, Sigma Nu’s fraternity magazine, about the procedure for petitioning the fraternity. Perry D. Caldwell (BI 0067 / ΔZ 0015), another Sigma Nu from Mount Union, was at Western Reserve when he learned of their inquiry. Caldwell’s enthusiasm for the Alpha Nu Society led the Cleveland alumni club to vouch for the Alpha Nus, resulting in the chartering of the Delta Zeta Chapter, the 76th chapter of Sigma Nu. Delta Zeta’s installation ceremony was on 22 February 1909—exactly two years after that of Delta Alpha.

After America’s entry into World War I in 1917, the young chapters survived the ensuing draft by living together in Delta Zeta’s house. Many brothers joined the war effort and three of them succumbed to war-related injury and disease: Field Interpreter Harold S. Layton (ΔZ 0076), Hospital Corpsman Henry S. Amidon (ΔZ 0004), and Delta Alpha founder, First Lieutenant Clark Francy. Delta Alpha veterans of the war would eventually fashion a plaque in Francy’s honor, which now greets visitors at the entryway of Delta Alpha’s chapter house. 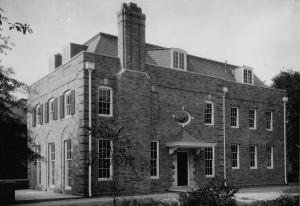 Following the war, Lester W. Bauman (ΔA 0138) spearheaded the successful campaign to form the Case School’s Interfraternity Council (IFC). This followed several unsuccessful efforts to create a student organization at the Case School for the purpose of interfraternal coordination and corporation. Case’s IFC would merge with its counterpart at WRU in the 1970s, eventually becoming today’s Interfraternity Congress.

In 1929, shortly before the Great Depression, Delta Alpha moved into a house at 2133 Abington Road, built specifically for the chapter. A decade later, World War II hit both Delta Alpha and Delta Zeta hard, bringing Delta Zeta to dormancy. The war also took the lives of two Delta Alpha men: Captain Harry J. Hayden III (ΔA 0272) and Charles E. Deterding, who had left for duty before his initiation. Further misfortune hit the chapter when Martin J. Trinter (ΔA 0245) was killed in a car accident on Christmas Day, 1941. His parents donated money to the chapter in his name. The chapter used some of that money to fund the Martin J. Trinter Memorial Award. The award was granted annually to the chapter’s most outstanding senior for many years thereafter. 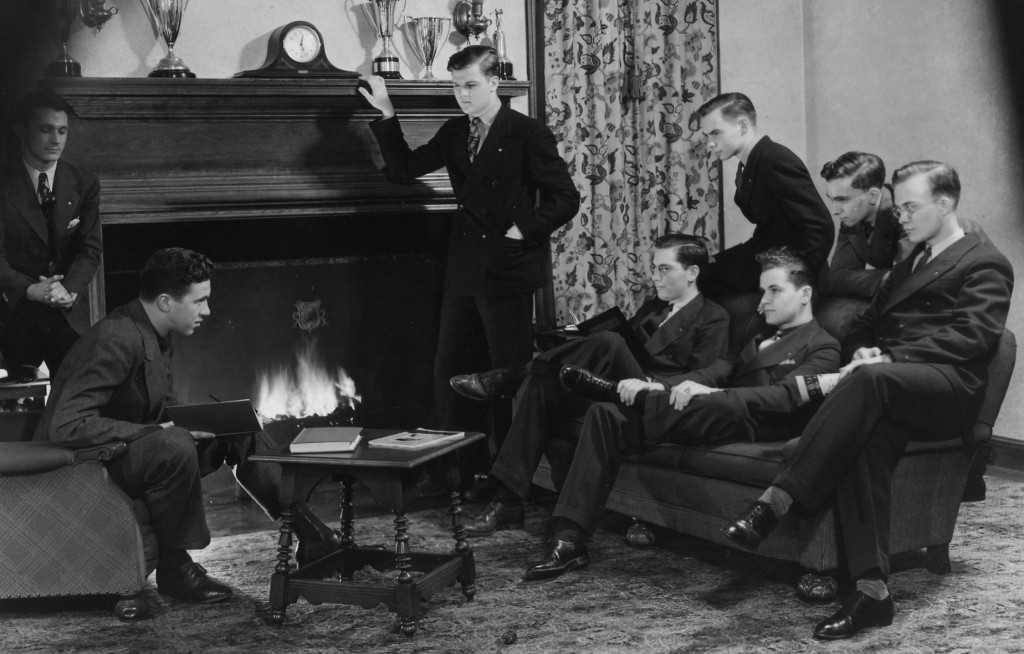 After the war, the efforts of Russell C. Wise (ΔZ 0289) brought upon Delta Zeta’s revival on 15 March 1949. The chapter’s “refounders” were initiated in Delta Alpha Chapter’s recreation room. But despite the best efforts of Delta Zeta’s men, low recruitment numbers led to Delta Zeta’s final dormancy in 1954.

By then, Case had been renamed the Case Institute of Technology (CIT). As part of CIT President T. Keith Glennan‘s plan to move Case’s fraternities to university-owned housing, Delta Alpha moved to 2235 Murray Hill Road in 1964. Its house on Abington Road was demolished to make room for the expansion of the University Hospitals of Cleveland. The next year, low alumni involvement led to the chartering of the Delta Alpha Alumni Chapter to give focus to the chapter’s alumni participation. But the largest change—decades in the making—was the 1968 federation of CIT and WRU, forming Case Western Reserve University (CWRU). Since Delta Zeta had been dormant for over ten years by that time, the two Sigma Nu chapters did not merge upon federation. In fact, Delta Alpha would not recruit Western Reserve students until the spring of 1977. 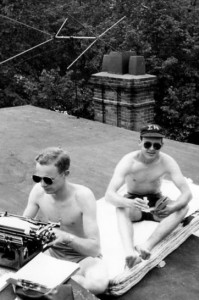 The 1980s started out very well for Delta Alpha Chapter. William G. Messenger (ΔA 0902 / A 0303) became the chapter’s first Alpha Affiliate—the highest honor an undergraduate Sigma Nu can receive. Michael V. Jaszczak (ΔA 0980 / A 0317) painted The Quest in 1986, which became Sigma Nu’s third official painting. But as the decade came to an end, the chapter began to suffer in recruitment. Although the chapter’s alumni were able to negotiate a lease (instead of a more restrictive rental agreement) from the university for its Murray Hill Road house, the chapter was unable to maintain the numbers to fill its home. The chapter’s nascent house corporation, founded in 1987 to take on responsibilities required by the lease, was immediately faced with an existential threat. 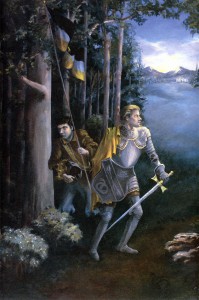 The Quest, by Michael Jaszczak.

With its low numbers, Delta Alpha on its way to suffering the same fate as Delta Zeta. To prevent this, Sigma Nu headquarters sent representatives to take control of and reorganize the chapter during the 1989–1990 school year. That year, the representatives removed several active members and recruited new members who met the general fraternity’s standards. On 12 May 1990, the chapter returned to its members’ control in a formal “rechartering” ceremony. Post-reorganization, Delta Alpha brothers to treated Delta Zeta differently than in years past; they obtained a photocopy of the Delta Zeta charter to hang alongside Delta Alpha’s own, and the Delta Alpha Alumni Chapter officially renamed itself the Delta Alpha / Delta Zeta Alumni Chapter.

The mid-to-late nineties set the foundation for the chapter’s current state. Reflecting the forward thinking of its host institution, Sigma Nu at CWRU created the first Sigma Nu website of any kind around 1990—a fact for which it was recognized at the 1996 Sigma Nu Grand Chapter. Traditions such as Café Sigma Nu during recruitment, Love–Truth–Honor discussions at the chapter’s semesterly Brotherhood Retreats, and the chapter’s internal judicial board also all began in the nineties. This solid foundation led to the chapter’s first Rock Chapter Honorable mention in 1998, followed by two more in 2006 and 2010. Between the honorable mentions, Delta Alpha earned Sigma Nu’s most prestigious chapter award—the Rock Chapter Award—in 2002, 2004, and 2008. While busy earning itself Sigma Nu awards, Delta Alpha earned CWRU’s President’s Cup for the best fraternity on campus in 1998, 1999, and on the chapter’s 100th anniversary in 2007.

Besides the chapter’s accolades, James H. Paxton (ΔA 1082 / A 0449 / Ω 0066) wrote Sigma Nu’s Affirmation of Knighthood Ceremony, based on a local Delta Alpha graduation ritual. The ceremony was approved at Grand Chapter in 1998, joining Sigma Nu’s three other ceremonies as part of the fraternity’s secret ritual. Paxton also wrote the most complete history of the chapter to date, Sigma Nu in Cleveland (1899–2009), which was published 11 years later.

Delta Alpha remains one of Sigma Nu and CWRU’s strongest chapters, as evidenced by its fourth and most recent Rock Chapter Award in 2014, in addition to being the first fraternity to earn more than one Excellence in CWRU’s Agnar Pytte Cup (the successor to the President’s Cup) Chapter Development process. The chapter’s membership development program, a full implementation of Sigma Nu’s LEAD program, currently serves as a model for other chapters at the university.

Sigma Nu at CWRU is in a very strong position. But there is always room for improvement; the chapter looks forward to the future and any challenges it may bring. 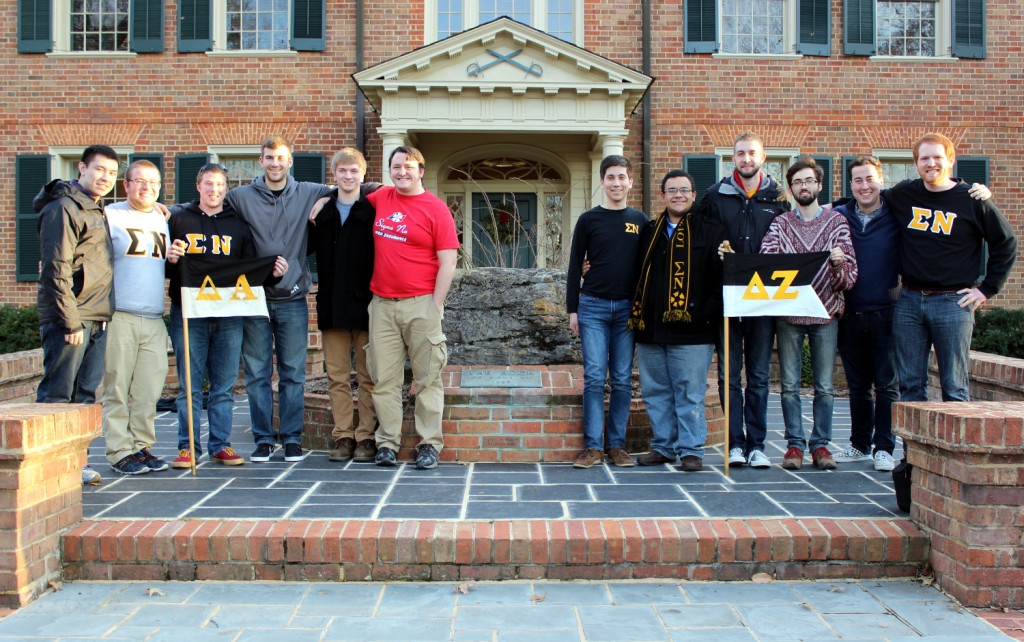